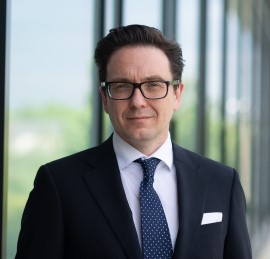 Darcy Romaine is a trial lawyer for the seriously injured. He has won trials where liability is complex and where the injuries involve catastrophic brain injury, complicated orthopaedic injury, and severe burn injury. Professionally, he is best known for his trials involving municipal negligence and his courtroom efforts to have regulations governing municipality maintenance obligations struck for providing unsafe and inadequate levels of care to the motoring public.

Darcy has also acted as outside counsel on behalf of the Ontario Public Guardian and Trustee, representing those whose injuries render them incapable of making legal decisions. Notably, such cases include a successful 22-day trial against the Ontario Provincial Police, Pelletier v. Her Majesty the Queen, in which a cyclist was struck and rendered catastrophically injured by an OPP cruiser. Another case of Darcy’s, Youssef v. Redi-Mix Limited et al., went to the Supreme Court of Canada to interpret the Residential Tenancies Act and a landlord’s negligent property management, which contributed to a tenant’s livestock escaping the property and catastrophically injuring a passing motorcyclist.

Darcy is a current director of the York Region Law Association. From 2010 – 2017, he was a director of the Ontario Trial Lawyers Association (OTLA). In 2015 he was selected as OTLA’s representative to review Ontario’s proposed Protocol for Traffic Injury Management, to question the research scientists who authored the protocol, and to make submissions to the provincial government.

Darcy is also a frequent speaker at conferences concerning personal injury trial practice, focusing on municipal liability and trial conduct. He has presented at the Advocates’ Society, the Canadian Institute, the Law Society of Ontario, and has chaired and spoken at conferences with the Ontario Trial Lawyer’s Association. He has published numerous trade papers and articles on civil litigation and co-authored the chapter on municipal liability in the Oatley McLeish Guide to Personal Injury Practice in Motor Vehicle Cases.

His peers recently selected Darcy for inclusion in the 2019 edition of the Best Lawyers in Canada. More important than such recognition, Darcy would argue, are his trial and appeal results.

Darcy received his LL.B. from Osgoode Hall in 2002 and a Bachelor of Arts in Philosophy and English Literature in 1999 from the University of Ottawa. He was called to the Ontario bar in 2003.